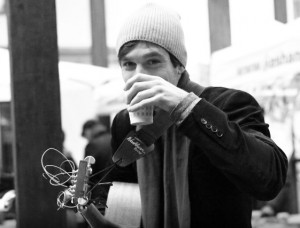 This week we have an interview with the very talented Jon. You may have heard him play his sweet, sweet music before. If not, stop by tomorrow May 3rd to be serenaded!

When did you start playing at the market?

I think it was a cold February morning before CNY 2013, with fingerless gloves.Why did I start playing there?

Well, it’s a funny story and my mate Ross tells it much better. One evening walking back with a new guitar in hand, I had a phone call from him to join a party. When I turned up, I tried to stash the guitar away from view but was caught. He then suggested to the eagerness of everyone that I play and since he had never heard me, he was waiting to utter the words, “don’t give up the day job” after my first song. The impromptu gig went down quite well though and by word of mouth, I heard from the lovely Amelia that she’d like me to play Jiashan market.
Do you have a band now, how did they form?

Yes, Parts & Labour, a 4-piece rock band with 2 guys from the UK and 1 from the USA, and I have Jiashan Market to thank for the formation. I was playing an acoustic set when I noticed a chap (Jack, drums) walking through with cymbal bags. Turns out he lives there so we spoke about jamming as musicians do but it wasn’t until a good 4-5 months later that they actually started playing together. He was doing the rounds in a cover band with Lewis (bass/vocals) but it wasn’t long before they became more interested in breaking out and developing creatively – Jack to express himself more freely through his drums, Lewis through his writing.

The band is built on a solid rhythm section. On top of that groove, you layer tight guitar, howling solos, hand-crafted melody and well-honed harmonies. You put these things together with a lot of hard work and you get a well-oiled music machine. We build it. We bring it. We let you have it. That’s how we work. That’s how we play. That’s Parts&Labour.

https://www.facebook.com/PARTSandLABOUR
https://soundcloud.com/parts-labour
Where can we see your band perform?
The Void, Nantong, tonight…
Yuyintang, 9th May
Mao Livehouse, 17th May
Boxing Cat Brewery Festival, 31st May
What do you like most about the Market?
I’m a Londoner (almost) and we tend to love markets… Amelia’s interpretation has me hooked since the setting gives life to a blend and diversity of food, drink and fashion that not many other places in Shanghai live up to. Musically though, improvisation with both voice and guitar all within a live sound.
0
May 17th Market!
Easter Cookie Decorating This Saturday!

ADD US ON WECHAT